I had been struggling to post this recommendation, I couldn’t figure out why, so I thought about this book for a few weeks.  Then the shooting in Charleston took place. Then I really thought about this story. I finally realized my struggle was shallow, I felt like I should be writing about light hearted beach reads. Beach reads are the cool kids right now. I have not been cool a day in my life, so why start now? In the heat of summer, my reccomendation is a high quality book about slavery and two little known abolistionists.  The Invention of Wings is heavy, yet it is an important book, and relevant to the history of Charleston. I will get to my beach reads later.

Sarah turns 11 and is given a girl named ‘Handful’. ‘Handful’ is hers to own, given like a piece of furniture or doll. Sarah attempts to set her free, but an 11 year old cannot change laws with a handwritten piece of paper. Handful is her slave, and the daughter of the best seamstress in Charleston. Handful and her mother are owned by the Grimke’s and keep the family plantation working and profitable.

The story flips back and forth from Handful to Sarah, telling the stories of Handful’s each girls life from childhood to adult. The injustice and cruelty is hard to stomach, but the story is so rich with character development, historically accurate events, and impeccable story-telling.

Sarah Grimke and her sister, Angelina, grew up to be  abolitionists. Sarah and her sister fought for the rights of slaves and the rights of women in a time when white men truly ruled the world with a tightly closed fist. The Grimke sisters were mocked and called spinsters. They are lesser known heroes in the fight against slavery.

Be sure to read the afterward, the Grimke Sisters were fascinating, and Sue Monk Kidd shares her research and methods of writing the story. A good read.

To Order on Amazon, click here:  The Invention of Wings

Calling Me Home by Julie Kibler

Dory has washed and set Ms. Isabelle’s hair every week for years. They know each other as most people know their regular stylist, sharing just the surface bits and pieces of their lives. This distance is eradicated, and their cordial friendship is taken to a new level when Isabelle asks Dory to drive her to a funeral across the country. Dory accepts with a bit of hesitation, and so begins a journey of friendship which travels across lines of race, generation, and social standing. The miles and hours pass by, as Isabelle tells Dory of her first love. Dory’s present struggles and Isabelle’s past agony unfold as they drive and share their stories.  Isabelle dredges up the past, bit by bit, and Dory compassionately wades through the memories with her.  Dory is fighting battles of her own, with teenage children and new relationships.  Isabelle pushes Dory to live a courageous life in the present, as she reconciles her past. The story is touching, well told, and a good read.  If you like strong women’s fiction, you will enjoy this book.

Calling Me Home: A Novel

The Girl on the Train by Paula Hawkins

Today I hoped for heavier traffic so I could finish listening The Girl on theTrain.  If you were a fan of Gone Girl, this is your next read.  Rachel rides the same train every day back and forth; she is lonely, tormented, and desperate.  As she rides the train from her small town to London each day, she gazes at the back gardens of all the homes.  She starts to notice the same people each day, she begins to create caricatures in her mind of who they are, what they might be like.  Then one day she sees something; something disturbing and suspicious, and the story gets very interesting.  Three women’s lives intertwine, each one battling their own demons, each one not quite what she seems.  This book is quietly thrilling because no one is easy to figure out, no one is all good or all bad, but some very bad things happen.  Girl on a Train is not a cuddly feel good story, it is dark and gritty, but the suspense at the end is impeccably written.  The tension will grip you to the core, if you need a plane or beach read, pick it up.  If you are fan of intensity, suspense, and thrillers, you will like it.

To Purchase from Amazon, click here: The Girl on the Train

Our book club recently read The Boys in the Boat by Daniel James Brown.  If you read only a handful of books this year, please put it at the top of your list. It is non-fiction at its finest, filled with facts, yet reads like story.  Daniel Brown tells the story of the University of Washington’s men’s crew team competing in the 1936 Berlin Olympics.  The story starts long before Berlin, with 9 boys coming together in Seattle, when the city was barely establishing itself.  The story of Joe, the main character is heart-breaking and inspiring.  With little support, or hardly a family to call his own, he begins to row at the University of Washington.  Joe’s story is an incredible tale of tenacity and overcoming adversity.  Brown explains the technicalities of rowing in such simple rich language that you will be enveloped and enthralled as you read.  As Hitler is rising to power and putting a gleaming sheen on Germany for the entire world to see; these humble boys come and fight for the Gold, with every ounce of strength they have.  The Boys in the Boat is rich with World War II history, Seattle history, and the thrill of competition.  If you liked stories like Rudy, Hoosiers, or Cinderella Man, you will love this book.  Put it in your top 5 for the year.  The audiobook is fantastic.

The Boys in the Boat: Nine Americans and Their Epic Quest for Gold at the 1936 Berlin Olympics

The Boys in the Boat: Nine Americans and Their Epic Quest for Gold at the 1936 Berlin Olympics

The story of the trapped Chilean miners is a story I remember hearing about, I knew they were rescued, and their plight sounded bad, but I was ignorant to the details of the story.  Reading Deep Down Dark was humbling to say the least. The daily conditions these men worked in were something I could never endure, however, their entrapment was truly inhumane.  One morning in August the miners left for a normal day of work and did not see the light of day again for 69 days.

While the men were trapped underground they made a pact to keep their story and only tell it to one person who would represent them well.  Hector Tobar was chosen, and he wrote an incredible narrative of their experience. It is known worldwide the men were recsued, but I was on the edge of my seat as I read. As a reader you begin to feel what the men were going through, balancing hope, fear, and helplessness day after day. Tobar wrote this as only a master storyteller could, he layered facts with tender moments from the lives of people. He included the topography of the mountain, technical details about drills and ore, the science of starvation, all pieced together in a heart-wrenching narrative.  The men bonded, fought, and prayed through the endless hours being trapped. It was engrossing from start to finish.  I was grateful for the knowledge I gained about this story and the conditions of modern day mining.  Deep Down Dark is the best book I have read in 2015.

Deep Down Dark: The Untold Stories of 33 Men Buried in a Chilean Mine, and the Miracle That Set Them Free

This is a photo of the capsule in which they were brought up out of the mine. Photo credit to smithsonian. 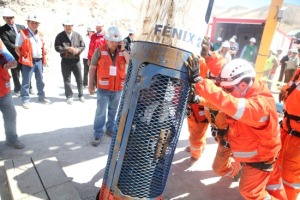 Here is a photo of the men that were trapped.  This is on the back of the book, but hard to see. Photo credit to Macmillan.