Somewhere along the way I remember reading about the importance of children seeing African American’s in books not being depicted as slaves. Thankfully, books are being published featuring African Americans contributions to society, art, engineering, and mathematics. Here are five books every teacher and parent should read to a young person.

The Boy Who Harnessed the Wind by William Kamkwamba and Bryan Mealer- The true story of how one boy saved his African village from drought. A child saw his village starving and suffering through a drought. He read books from the library and wondered if a windmill could solve the problem. He built a windmill out of salvaged junk yard parts, which brought electricity, and water to their crops. His story is incredible, and shows children what perseverance and faith can accomplish. It would fit perfectly into a STEM unit.

To Purchase this book on Amazon, click here: The Boy Who Harnessed the Wind

Planting the Trees of Kenya by Claire A. Nivola- Wangari Maathai won the Nobel Peace Prize for replanting trees across Kenya. After studying in America, she came home to find her home town had been deforested. She taught the women to plant tree seeds, and nourish the seedlings to maturity. Her story is compelling, she empowered the people of her native country, and restored it’s natural habitat. I love this version, the illustrations are lovely, and it explains her extensive teaching and empowerment of women and children.

To Purchase this book on Amazon, click here: Planting the Trees of Kenya: The Story of Wangari Maathai (Frances Foster Books) 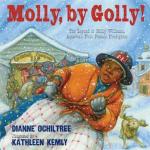 Molly, by Golly! The Legend of Molly Williams, America’s First Female Firefighter by Dianne Ochiltree – The cook at the New York City fire department is credited with being the first woman to serve as a Fire Fighter in the early 1800’s. When many men were sick during a snowstorm, Molly saved the day by distinguishing a fire. This is a gem of little known history.

To Purchase this book on Amazon, click here: Molly, by Golly!: The Legend of Molly Williams, America’s First Female Firefighter

Whoosh! Lonnie Johnson’s Super-Soaking Stream of Inventions by Chris Barton-  The perseverance this inventor had is unprecedented.  Lonnie Johnson was a child of six children who loved to tinker and invent things while growing up in Mobile, Alabama. He pursued engineering as a career, and successfully worked on space exploration. His passion was inventing, and he never gave up on his dreams. After many setbacks, he invented the super soaker. Don Tate did an incredible job illustrating this story. Tate is a great talent in children’s publishing.

Harlem’s Little Blackbird: The Story of Florence Mills by Renee Watson- This book is simply stunning. Florence Mills was a renowned  singer during the Harlem Renaissance. The daughter of former slaves, she faced prejudice after prejudice attempting to launch her singing career. Her life story takes the reader from a shack in Washington DC, to Harlem, London, and New York City. Her direct quotes are included seamlessly in the text, it has a rich cadence, and a powerful story-teller’s voice.

To Purchase this book on Amazon, click here: Harlem’s Little Blackbird: The Story of Florence Mills